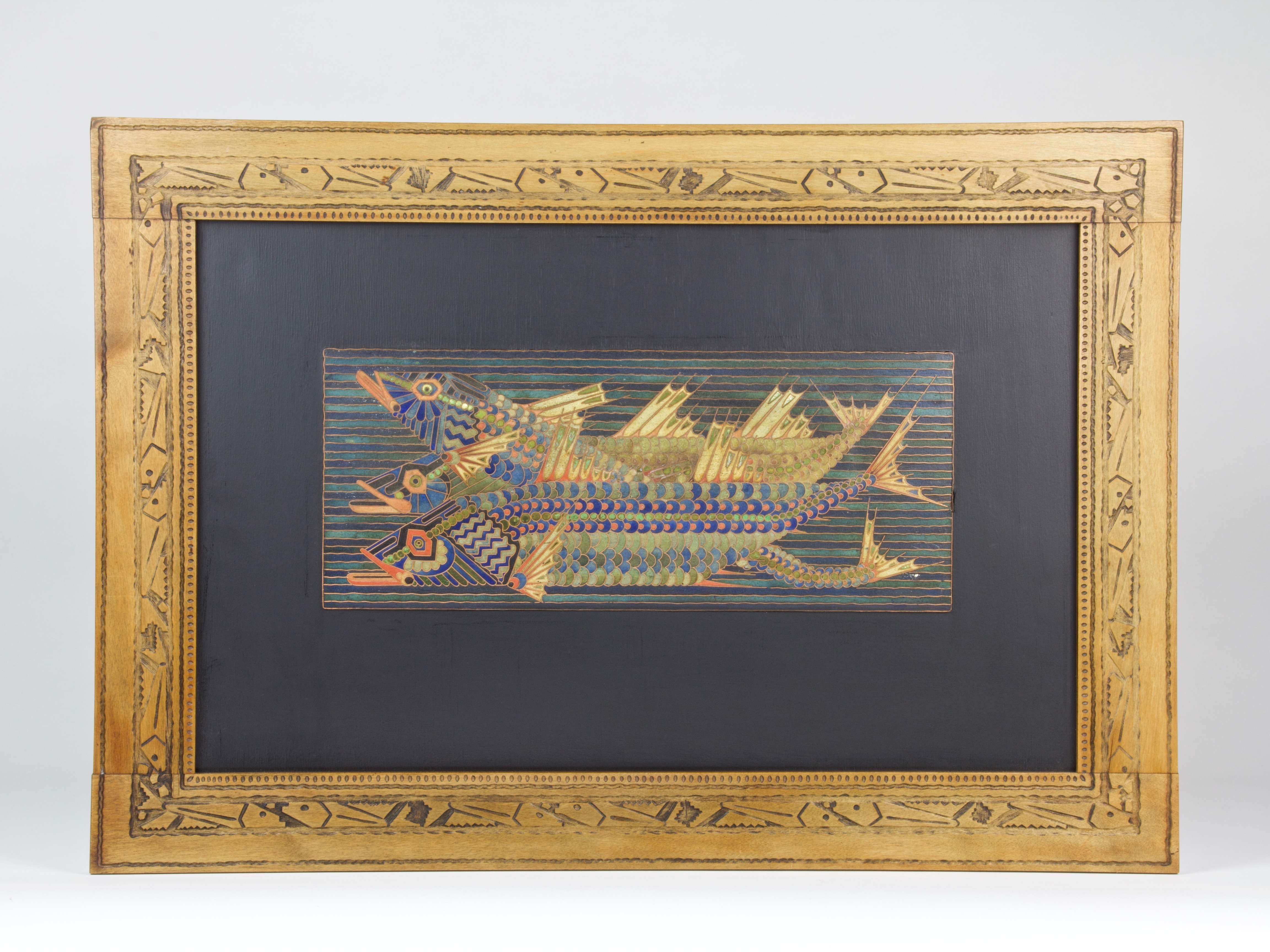 Kunstconsult examined a special new addition in its collection: a cloisonné panel designed by designer and decorative artist Marie Kuyken (1898-1988). The panel, dating from 1918, shows a beautiful representation of three colourful fishes and is set in a frame with inserted decoration in a matching fish motif. In consultation with design historian Marjan Groot, museum curator Jan de Bruijn and Marie’s second cousin Thierry Kuyken, Kunstconsult examined the special panel, a unique object in the art trade.

For years Marie Kuyken has been a subject of research for Marjan Groot (1959 - 2019). As a historian she specialized in applied art and lectured at the Vrije Universiteit in Amsterdam (previously at Leiden University). She describes Marie in her book, Women in Design (2007), as "one of the few and also very professional designers in our country."Marjan Groot also paid attention to the colourful and imaginative cloisonné panels that Marie designed since 1918 for furniture and wall decoration. The technique was inspired by wooden blocks in which decorations were applied with copper strips and pressed on wallpapers, fabrics and floor coverings. Since 1904 these were made in the engraving workshop of her father Wilhelm Kuyken Jr. (1876-1945) in Haarlem. The application of the pressure blocks as decoration was an idea of ​​her uncle, sculptor Hendrik van den Eijnde (1869-1939). Marie made the design and craftsmen hammered red copper or silver strips in a wooden panel into cells, or "cloisons". These cells were filled with blends of plaster and gelatin in various colours.

When Jan de Bruijn, now curator of applied art at the Gemeentemuseum in The Hague, did an internship at Kunstconsult in 2014, he also got inspired by Marie's cloisonné panels. For Art Deco magazine, he researched a fireplace screen with cloisonné in the Kunstconsult collection. This fireplace screen displays a ‘colourful fusion between a snake and a dragon’ in the midst of blazing flames in an ‘expressionist, erratic but yet stylized design.’ The frame was made by the renowned studio for ornamental forging Winkelman & Van der Bijl in Amsterdam, known for its fencing and ornamental forging in and at the Scheepvaarthuis.

This ‘high-quality craftsman object’ attracts the attention of the Stedelijk Museum. In consultation with Marjan Groot the object was included in the 2016 exhibition called ‘Living in the Amsterdam School.’ For this purpose, the fireplace screen was purchased by the museum. Today, the fireplace screen is located in Stedelijk Base, in the bottom of the so-called ‘Bathtub’, where the permanent chronological collection of art and design since 1880 to the present day is exhibited. The fireplace screen is located between a dresser by Michel de Klerk, a clock by Hildo Krop and a sculpture by John Rädecker. It is a key piece in the representation of the expressionist Amsterdam School movement from just after the First World War. 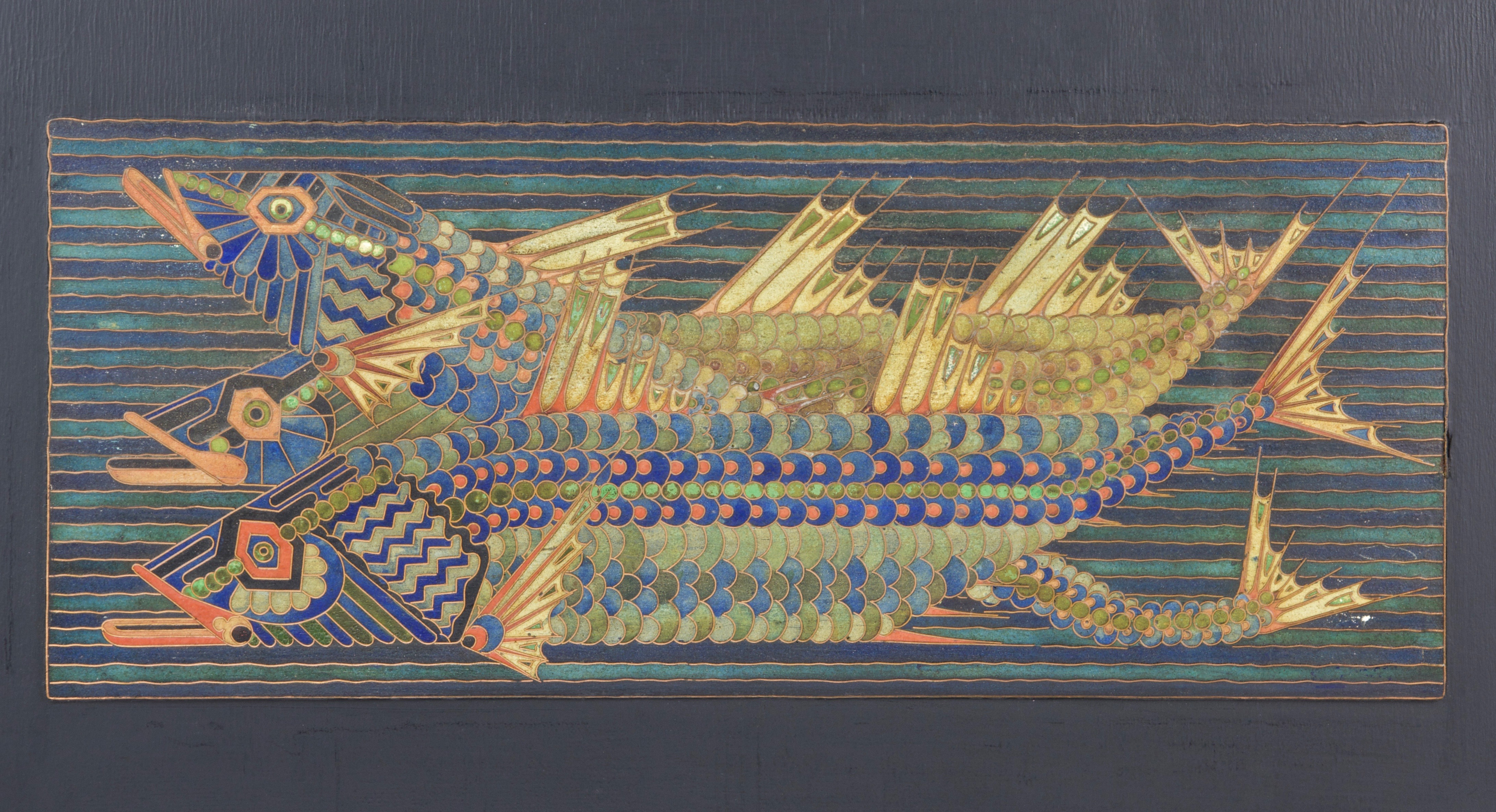 The cloisonné panel by Marie Kuyken that Kunstconsult recently acquired is meant to decorate the wall. Just like the fireplace screen, this fish panel shows a colourful expressionistic representation of stylized shaped animals. However, where the whimsical lines of the flames and dragon matched so well with the function of the fireplace screen, in the fish panel the lines are tidier arranged in the scaly skin of the fish. In the background the blue and sea green calm rippling suggest water. A special feature is the original wooden frame with stung fishes, carefully crafted and suitable with the representation in the cloisonné.

Concept designs in the archive

Full of enthusiasm about this finding, we contacted Marjan Groot. She had been in contact with descendants of Marie Kuyken and she had researched the Kuyken company archive. Marjan Groot wrote about her research and findings in the Eigenbouwer magazine of June 2018. She immediately recognized the panel: she has seen a concept in the archive. Marjan brought us into contact with Thierry Kuyken, Marie's second cousin and manager of the Kuyken archive. We received a photo of the detailed concept design. The front fish in particular is clearly detailed, when it comes to colour and lines. In the design, the two fishes in the back appear to be a bit pale. We wondered if this was the intention. Thierry explains that Marie was trying to create a depth effect. She did this by underlining the central element in the representation. To create this effect, she applied shadows and relief. When colouring the cloisonné Marie used the concept drawing as a model. It mainly gave her a first impression of what the coloured cloisonné would look like. She made every design in a limited edition, sometimes in different colour combinations. For special orders, only one single copy was made.

Thierry searched further in the archive for more information about our fish panel. For example, in order-books from the Kuyken company panels can be retrieved. They were made to order. Not all sold panels are stated: panels for friends and family, and for exhibitions, are often not included. Yet Thierry finds an entry of "Fishes with title (Rhytme)" under number 17, the same number as on the back of our fish panel. The order book states that this panel was completed on August 2 in 1918 and was sold that same day to ‘Shipping company Vischerman and Co, Amsterdam’ for 165 guilders, a considerable amount at that time. Would this be our fish panel? 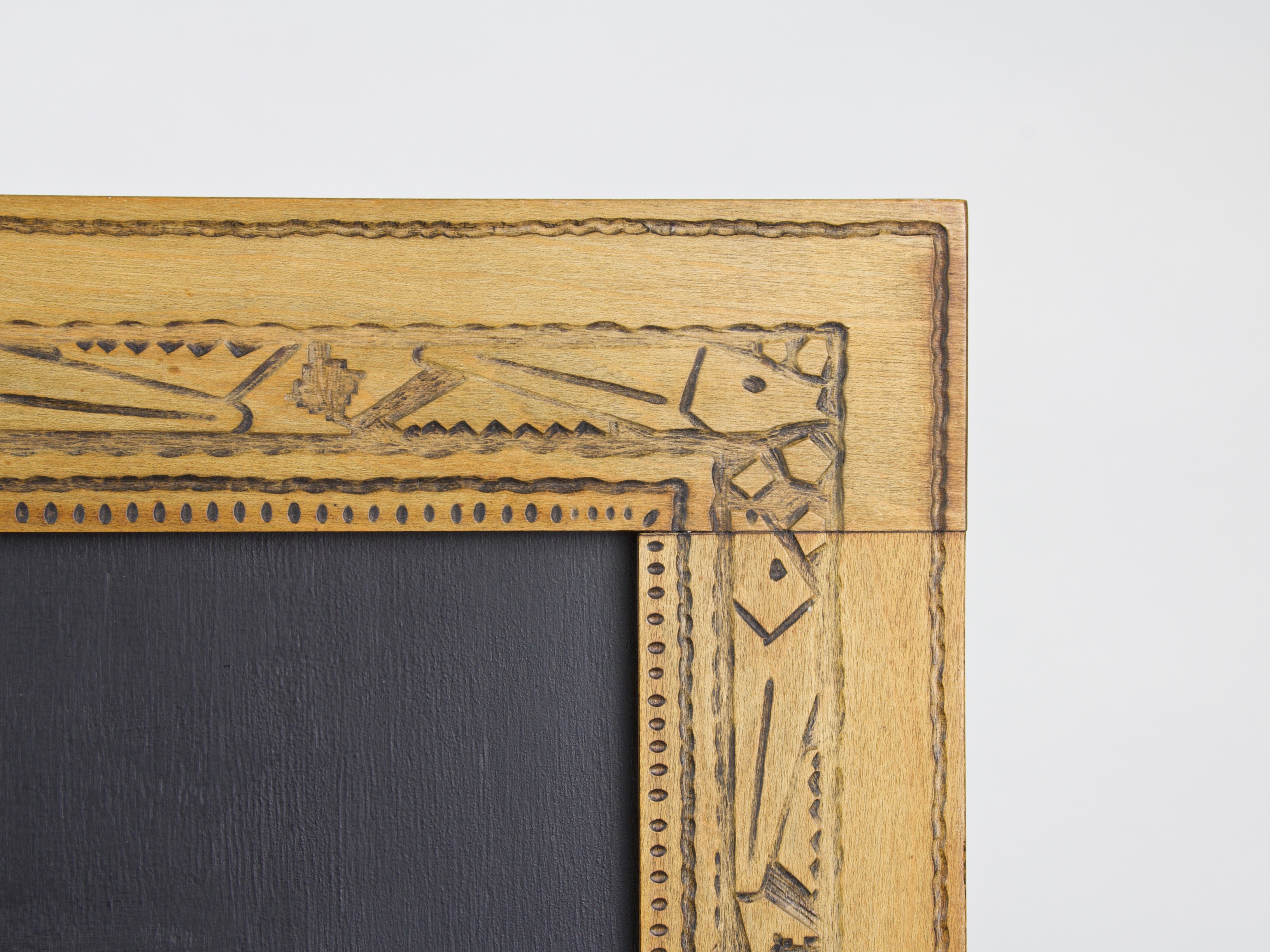 Frame adapted to the cloisonné

The company archive appears to be an important source of information. In addition to the concept design of our fish panel, the archive also contains many other designs for other cloisonné. Marjan Groot found out that sometimes a decorated wooden frame was made for a specific panel. Thierry says that customers could choose between different types of frames: ‘panel without frame, with simple frame (without engraved motifs) or with a design engraved.’ There are several cloisonné panels with an engraved frame, almost always related to the central theme of the representation. This confirms that the combination of cloisonné and decorated frame is intended by the designer. Other designs and photos in the archive show the diversity of the Kuyken family business, which moved to Dilbeek near Brussels in the early 1920s. In the 1930s, under the leadership of Marie’s younger brother Frits, the family company produced modernist steel tubular furniture.

The administration in the archive also provides insight into the trade networks and sales of the cloisonné panels. The panels were well received at exhibitions between 1918 and 1921. For example, for the Exhibition of Dutch Arts and Crafts organized by Carel Lion Cachet in the building of the Society for Visual Arts in Amsterdam and at the trade fair for Arts and Crafts in 1919 in the Stedelijk Museum. In 1918 a solo exhibition of Marie’s cloisonné in Kunstzaal D’Audretsch in The Hague titled ‘Modern Hollandsche Cloisonné by M.C. Kuyken’ was held.  Brother Frits designed the poster for the solo exhibition. Looking for more information about our fish panel, Thierry looks at the list of panels for this exhibition in the archive. Panel number 17 is indeed mentioned!

Now, more than a hundred years later, there are rumors about a solo exhibition in The Hague. Following the research by Marjan Groot in the archive of Thierry Kuyken, Jan de Bruijn once again examined the cloisonné panels of Marie Kuyken. He came to Kunstconsult to take a good look at the fish panel. He thinks it is beautiful, "one of the best" he has seen. He is particularly pleased with the refined drawings in the narrow copper lines. And the condition is "neat" compared to other cloisonné panels from Marie. He mainly knows panels with representations of birds or flowers and has rarely seen fishes. "The Kuyken company is totally underexposed," he says: an exhibition must change this. He is looking into the possibilities for an exhibition of cloisonné panels in the Gemeentemuseum in The Hague. The fish panel from the Kunstconsult collection would certainly be in place.

Apart from Marjan Groot, others have previously written about Marie Kuyken as a wallpaper designer. In 1994, Ype Koopmans devoted a few paragraphs to the cloisonné in his book about Hendrik van den Eijnde. Marjan Groot mentioned Marie for the first time in 1996 in the book ‘Arts and Crafts in the Netherlands 1880-1940’ and in 2000 elaborated further on Marie's cloisonné panels in the Meentwijk collection in the book ‘Living in a collection.’ The most extensive article by Marjan Groot on the cloisonné panels has been 'The artistic production of the family business Kuyken between 1918 and 1960 in the Netherlands and Belgium', published in Eigenbouwer number 9 in June 2018. In Art Deco magazine no. 10 (2014) Jan de Bruijn wrote an extensive article about the fireplace screen. You can order this issue using abo@artdecomagazine.nl. 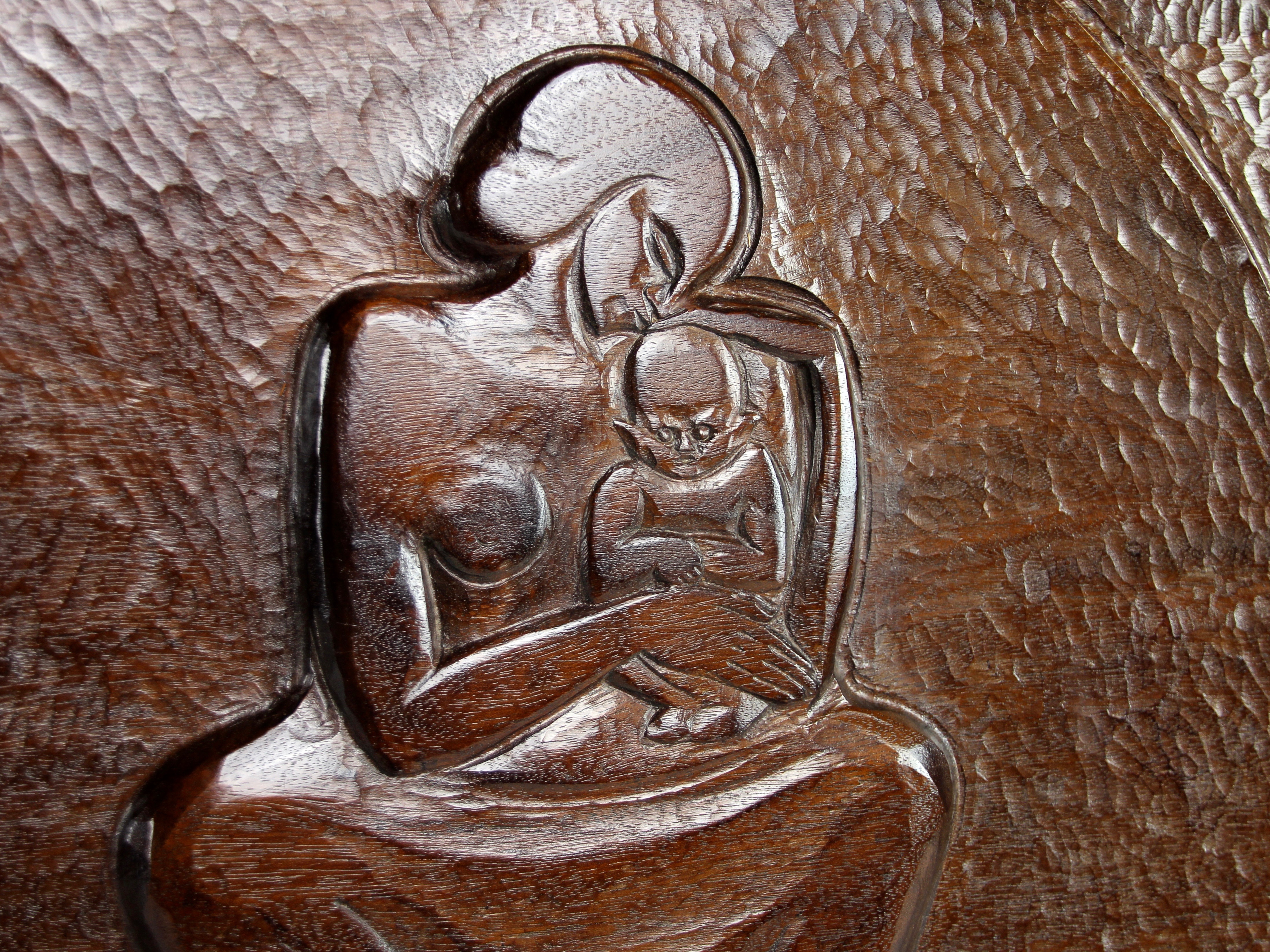 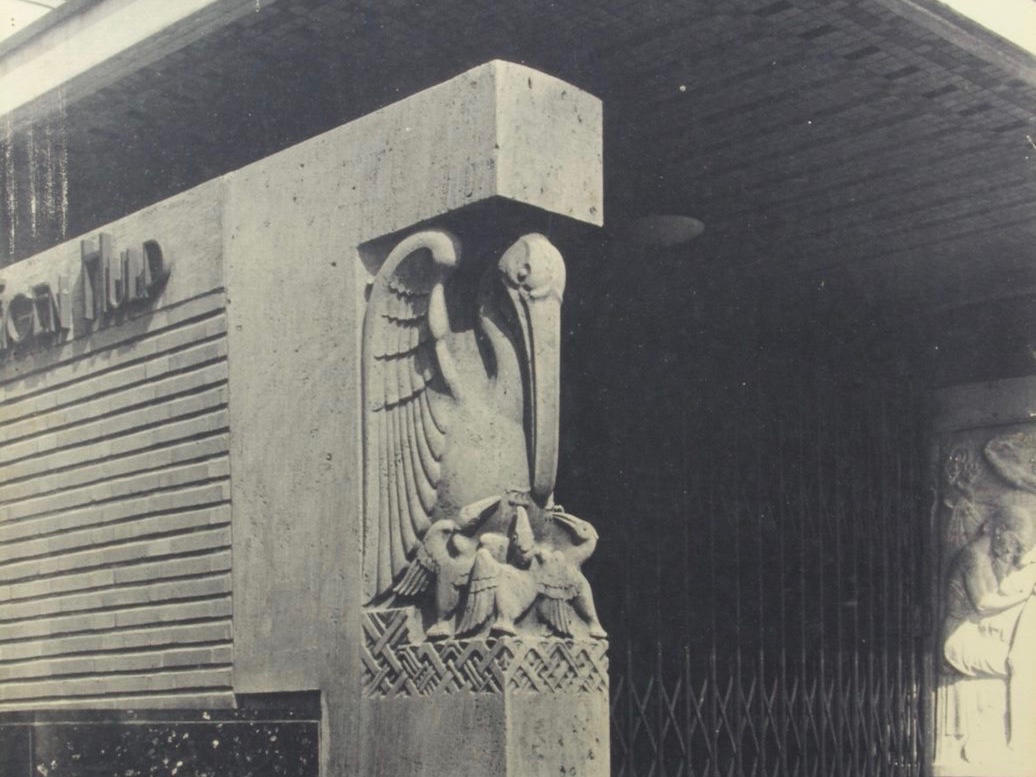 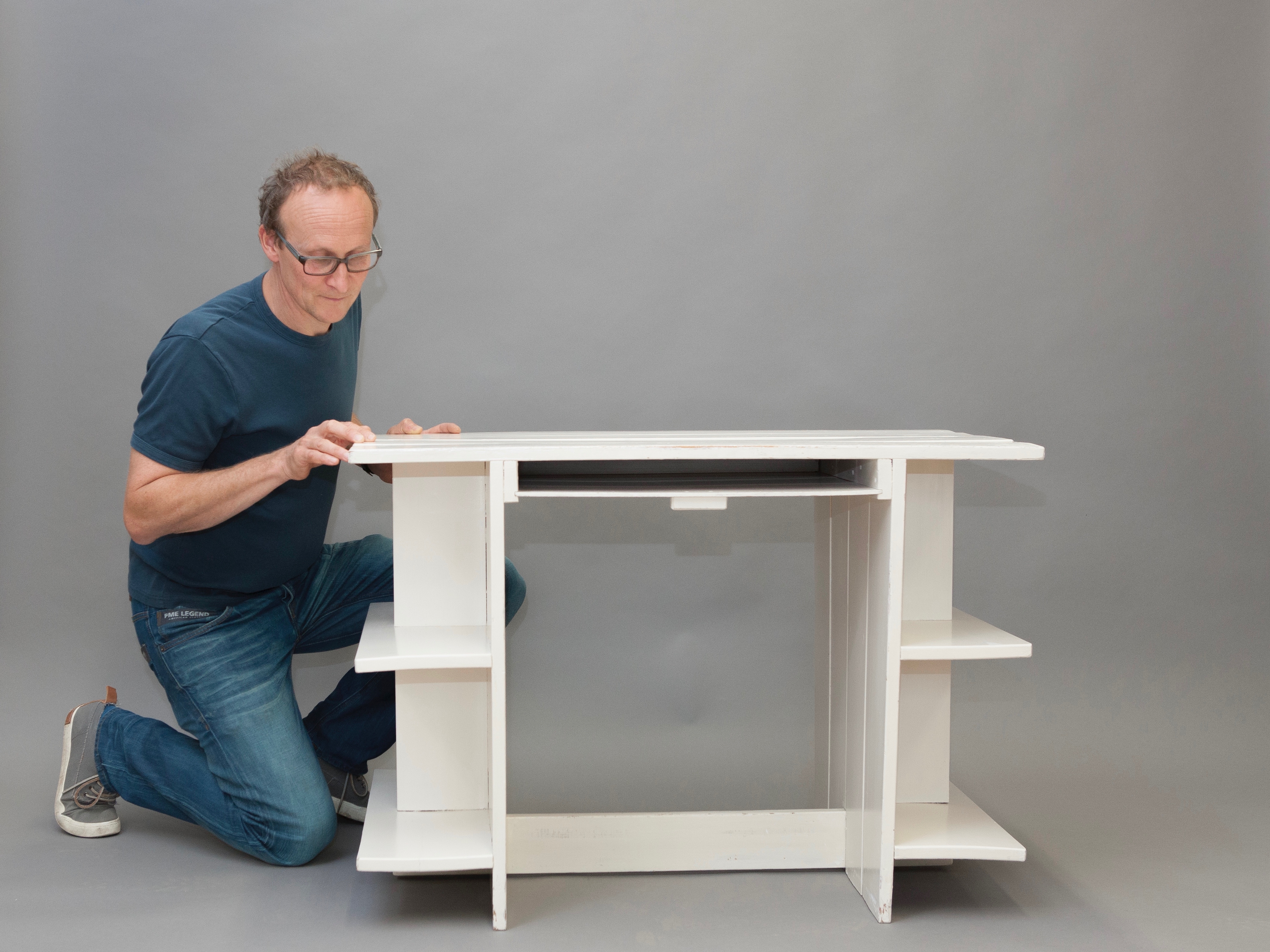