Hendrik Albertus van den Eijnde (1869-1939) was a Dutch sculptor, furniture designer and graphic artist. As a sculptor, Van den Eijnde initially made religious work, including for the Sint Bavo cathedral in Haarlem. But he became best known as a sculptor of monuments and facade decorations on houses and company buildings. His heyday as a sculptor runs parallel to that of the Amsterdam School. From 1913 to 1916 Van den Eijnde was head of the sculptor's studio where the sculptures for the Scheepvaarthuis, the iconic Amsterdam School building designed by Joan van der Mey, were made. Here, he worked together with Hildo Krop and Anton Rädecker. In 1917 he started his own studio. Moreover, from 1917 to 1923 he was a sculptor at the Rijksgebouwendienst (Government Buildings Agency). From 1919 to 1925, Van den Eijnde was editor of the art magazine Wendingen, also called ‘the voice of the Amsterdam School’. 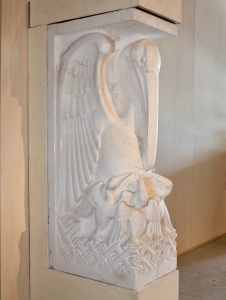