Marie Kuyken (1898-1988) was one of the few female designers in the Netherlands at the beginning of the 20th century. She became known for her wallpaper designs for the Rath & Doodeheefver factory. In addition, she designed colorful and imaginative cloisonné panels for furniture and wall decoration from 1918 onwards. The technique was inspired by wooden blocks in which decorations were applied with copper strips for printing on wallpaper, fabrics and floor coverings. Since 1904 these were made in the workshop of her father Wilhelm Kuyken Jr. (1876-1945) in Haarlem. The application of the printing blocks as a decoration in itself was an idea of her uncle, sculptor Hendrik van den Eijnde (1869-1939). Marie made the design and craftsmen in the workshop hammered red copper or silver strips into a wooden panel into cells, or 'cloisons', which were filled with mixtures of plaster and gelatin in various colors. 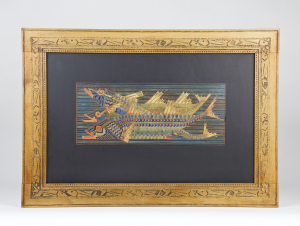