The Netherlands 1885 - 1956
Long before John Rädecker became known as the sculptor of the Dutch National war memorial on the Dam (Amsterdam) he enjoyed great fame. With his expressionist body of work - visionary faces/portraits, human and animal figures – in an unprecedented style which is often simply characterized as Amsterdam School but in fact featured a much more complex melting pot of influences. Rädecker departed from traditional styles and motifs in sculpting and became well known around the world.
Rädecker is mostly known for his sculptures but he has a versatile body of work comprising great two-dimensional work as well.  During his first solo exhibition at the Rotterdam Art Circle in 1932 he showed his versatility to the public. He not only presented 35 sculptures, but also 32 drawings and 10 paintings. Although Rädecker already approached the subject matter  in two dimensions before WWI, from the mid 1920s on he presented himself more prominently as a draftsman and painter.
This expressionist painting by Rädecker derived from the collection of the ‘Art Pope’ H.P. Bremmer and has been on a long term loan at the Gemeentemuseum Den Haag. In 1956, it was part of a retrospective in honor of the recently deceased artist at the Stedelijk Museum in Amsterdam. The painting depicts a powerful bird of prey with a fearsome beak, its destructive claws clutching a branch. Rädecker painted the animal in 1925, the year in which he also made a bird of prey with the same majestic wings, beak and talons out of sandstone; as a garden memorial sculpture for the married couple Hintzen-s'Jacob in Berg en Dal. This sculpture is now part of the collection Museum Boijmans Van Beuningen.
Exhibited in: Gemeentemuseum Den Haag, long-term loan HP Bremmer, from March 1950. Stedelijk Museum Amsterdam, "John Rädecker 1885-1956 eretentoonstelling “, May-June 1956.
Literature: Y. Koopmans, John Rädecker, Zwolle: Waanders Publishers, 2006, p. 342 (img. 11-33).
Clear
Style
Clear
John (J.A.) Raedecker 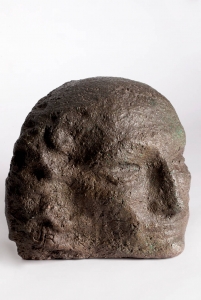