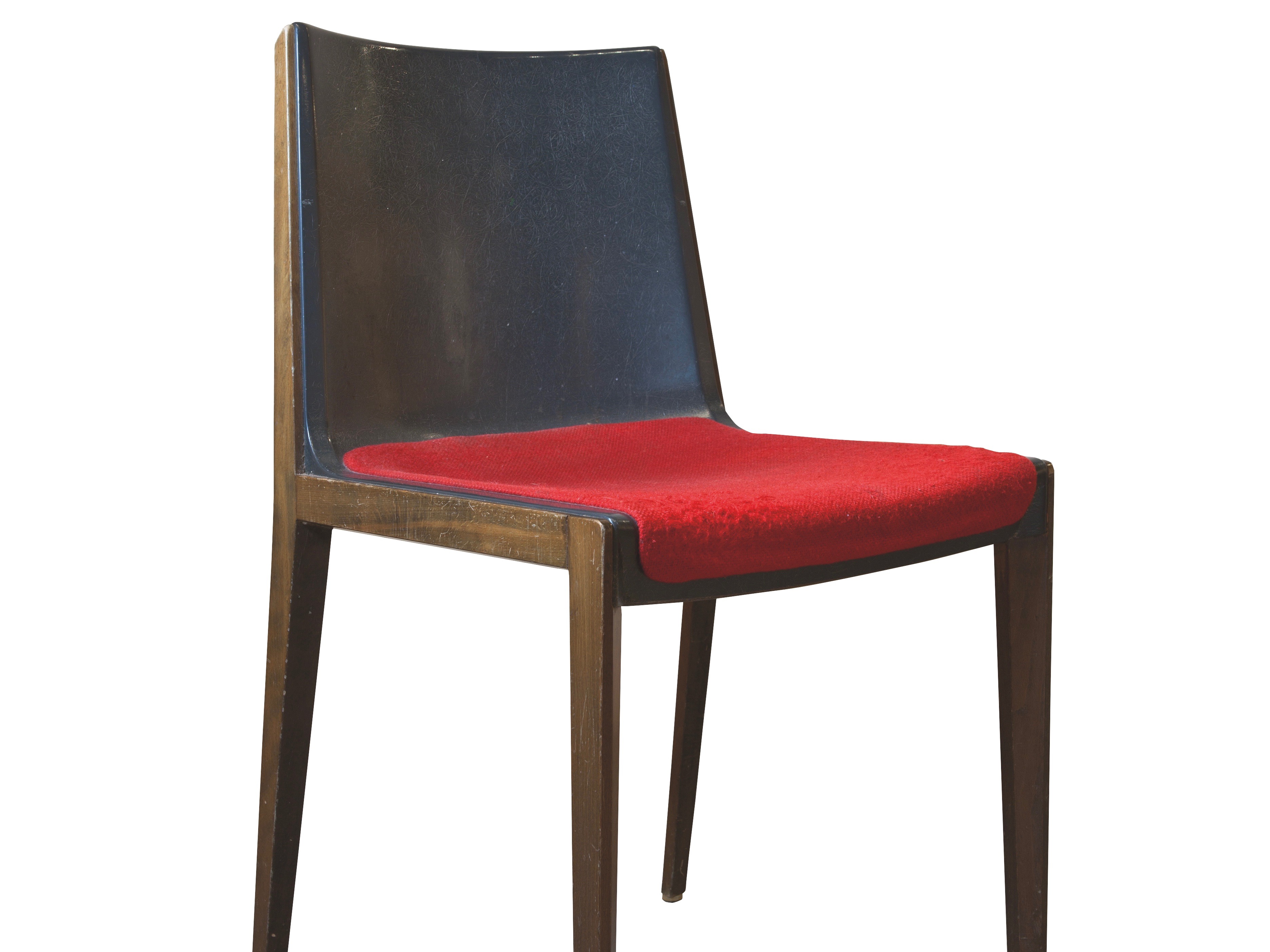 Not many of Friso Kramer’s Wood-polyester chairs are in circulation. Even though the chair is part of the design collection of the Stedelijk Museum, little information can be found about it. A conversation with Netty Kramer, spouse and secretary of the designer, sheds light on this rare designer chair.

The functionalist Bauhaus ideology has been rooted in Dutch design education. For example, Mart Stam, as director of the Instituut voor Kunstnijverheidsonderwijs (Institute for Applied Arts Education, the later Gerrit Rietveld Academie) passed on the Bauhaus ideology to a second generation, of which Friso Kramer is a well-known representative. Kunstconsult recently expanded the sales collection with a set of special chairs designed by Friso Kramer: model 210/1, produced by Wilkhahn from 1966 for a short period. After some necessary research, a conversation with Netty Kramer, spouse and secretary of Friso Kramer, finally revealed the complete background story of the chair.

First chair in these materials

As it turned out, the 210/1 by Friso Kramer (1922) was the first chair made of a combination of wood and polyester. That is why Netty Kramer specifically refers to the ‘Wood-polyester chair’ when she tells about this innovative design. The Dutch industrial designer Kramer, best known for his Revolt chair from 1953, is seen as a pioneer of Dutch industrial design. The Wood-polyester chair, which he designed for Wilkhahn in 1966, is a good example of the many innovative objects he has created during his long career.

Education along the lines of Bauhaus

Friso Kramer is the son of Amsterdam School architect Piet Kramer, who designed the building of De Bijenkorf department store in The Hague. However, at the Instituut voor Kunstnijverheidsonderwijs in Amsterdam, which later became the Gerrit Rietveld Academie, Friso Kramer was taught along the lines of Bauhaus.
The design principles were very different from the decorative and artisanal Amsterdam School principles of his father. Mart Stam, then director of the Instituut voor Kunstnijverheidsonderwijs, emphasized the social responsibility of the industrial designer, in line with the Bauhaus ideology. The function was central: the design must serve the user optimally. But effective use of materials and the possibility of mass production were also important values. According to the Bauhaus principles, the students were taught that the old ‘kitchy’ taste had to make way for a functional style. 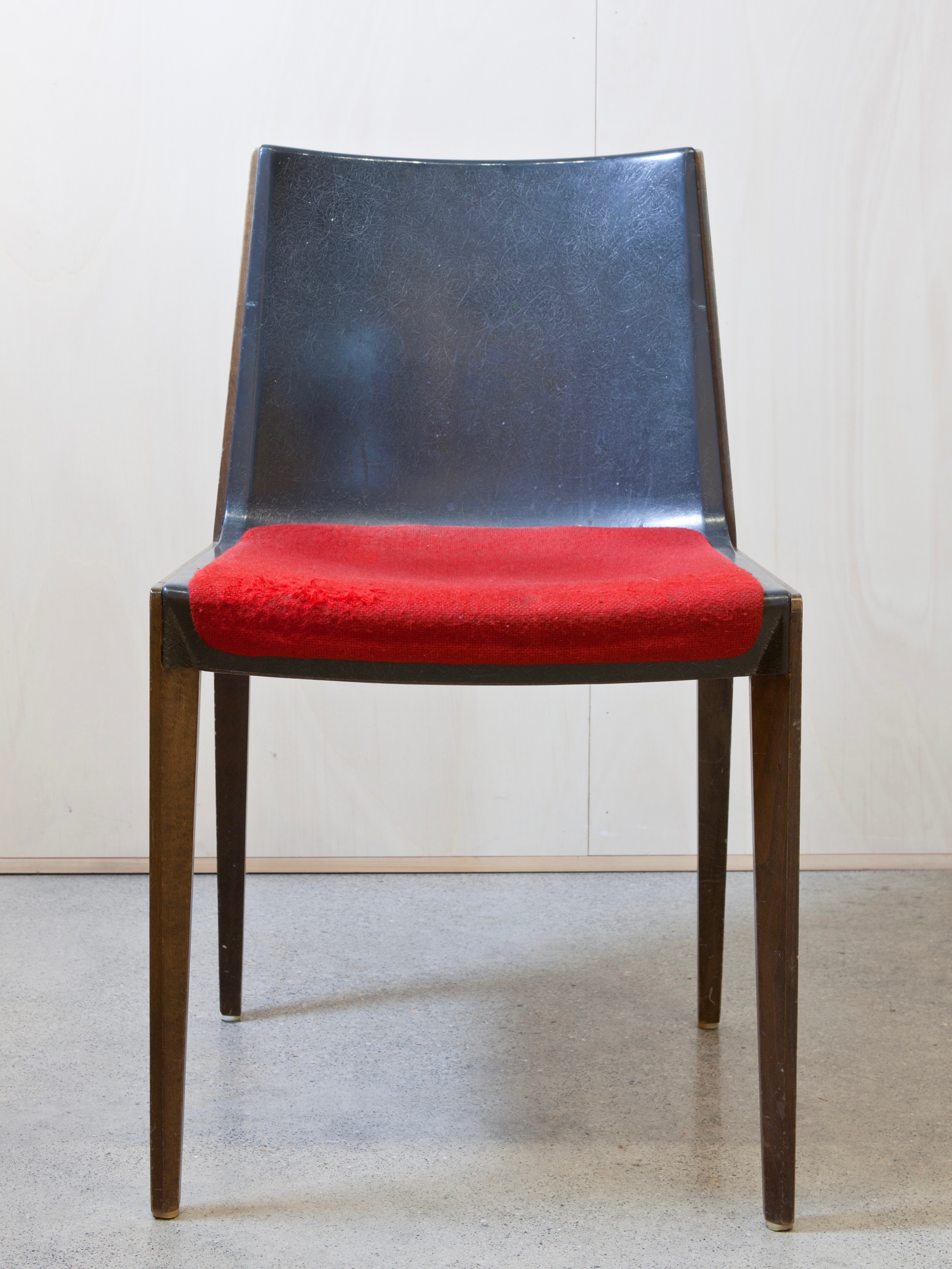 As an industrial designer, Friso Kramer maintained this ideology throughout his career. He worked for many employers, for whom he designed objects that can still be recognized in the Dutch interior and street scene thanks to their effective design. The most famous design by Kramer is probably the Revolt chair for Ahrend, part of De Cirkel, from 1953. This design classic was a great success at the time. Kramer worked for furniture producer Ahrend from 1948 to 1983, first as designer and from 1971 as lead designer. Well-known designs on a freelance basis are the green mailbox for the PTT (State-owned enterprise of Post offices, Telegraphy and Telephony, 1970) and the Friso Kramer I streetlight that he originally designed for the municipality of The Hague, but which can now be found all over The Netherlands.

In the 1960s, Friso Kramer left Ahrend for a short period to set up his own design agency, Total Design, together with designers Wim Crouwel, Benno Wissing and Paul and Dick Schwartz. In this period, model 210/1 came into existence in commission of German furniture manufacturer Wilkhahn. The 210/1, or the Wood-polyester chair, has a shallow seat of molded polyester. A wooden frame fortifies the railing and also forms the base.  Netty Kramers explains that Wilkhahn mainly specialized in wood processing, the idea to combine this with polyester was a new approach for the company. Modern materials like fiberglass, polyester and steel were introduced at Wilkhahn in the 1960s to make more sustainable objects. For example, a polyester seat was already made in the factory. When Friso Kramer saw this, he came up with the idea to combine it with wood for a chair.
The chair was not a commercial success and therefore remained in production for only a few years, despite its unique and innovative design. With the techniques from that time the chair proved unsuitable for intensive use; over time, small cracks would appear in the backrest.

A year later, in 1967, Kramer received a second commission from Wilkhahn, this time for a bench for public spaces. Once again, Kramer used polyester with which he formed a seat. This time, however, he designed an aluminum frame, which resulted in a sturdy and durable product. The leg construction also provides flexibility to the design with the possibility of attaching it to the floor or wall and to connect multiple bench modules or a table. The benches are inviting, comfortable and also easy to keep clean.
This 1200 series could be seen as a further development of model 210/1, with a more sustainable construction.
Netty Kramer explains that Friso Kramer originally had the idea to use laminated wood for the Wood-polyester chair, which would have resulted in a more solid construction. However, for production reasons, solid wood appeared to be more feasible for the manufacturer.
Later Kramer would therefore adjust the design of the Wood-polyester chair a little by making the wooden frame thicker. 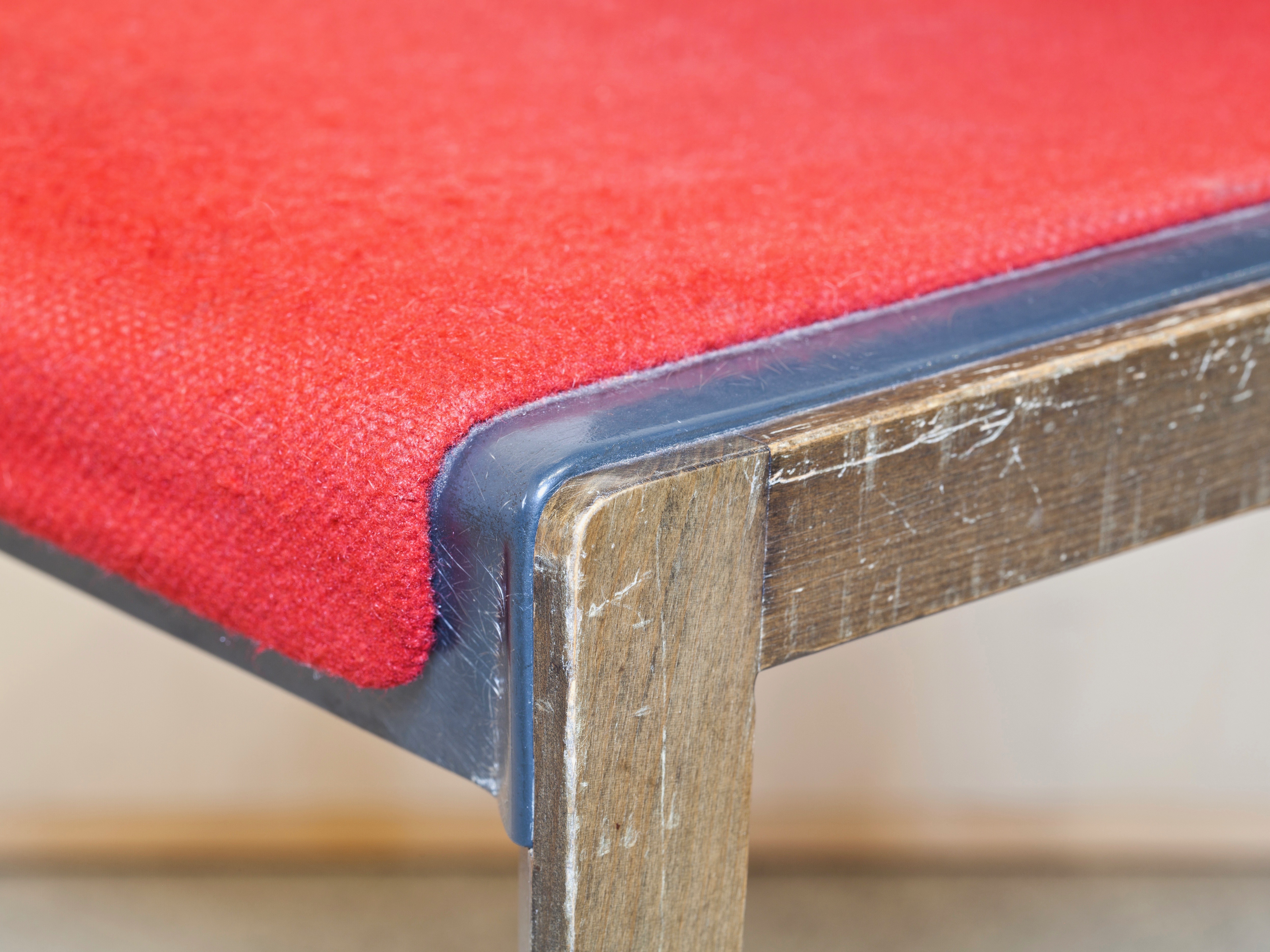 ‘A designer has to design himself away’

Clearly present in the Wood-polyester chair is the ultimate functionality that Kramer strived for in his entire design career. Every part of the design serves to optimize the object. Kramer’s design philosophy was that the maker should not be visible in the design. In an interview with the newspaper NRC Handelsblad in 2012, he stated: ‘A designer has to design himself away’. What he meant was that the user should never be hindered by the utensil. The design must serve the user optimally. Remarkable in that light is a difference in detail between the chairs in the collections of the Stedelijk Museum and Kunstconsult. The latter has a textile upholstery of the seat. Netty Kramer explains that this was a comfort option, for which the customer could choose when ordering the chair.

After being on show at the exhibition Vormgevers (‘Designers’) at the Stedelijk Museum in the spring of 1968, the 210/1 was added to the permanent museum collection in 1969. During this period, curator Maarten Bertheux increasingly purchased design that innovatively used materials such as polymer. The Wood-polyester chair by Kramer could not be missed in the collection, as the first chair with this combination of materials. The rare chair is a striking example of Friso Kramer’s oeuvre: simple but effective, progressive, with a minimal use of material and a high aesthetic value. 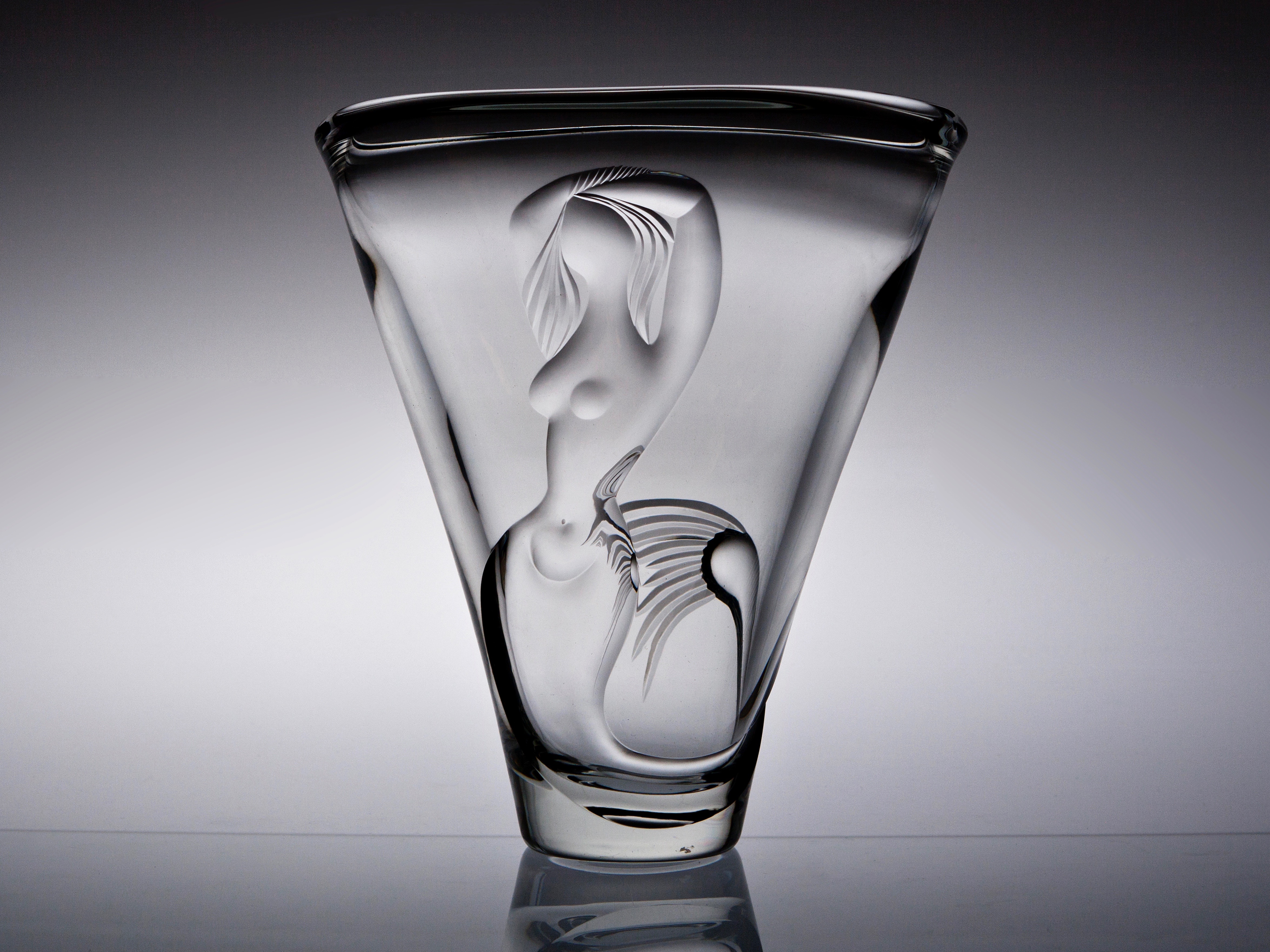 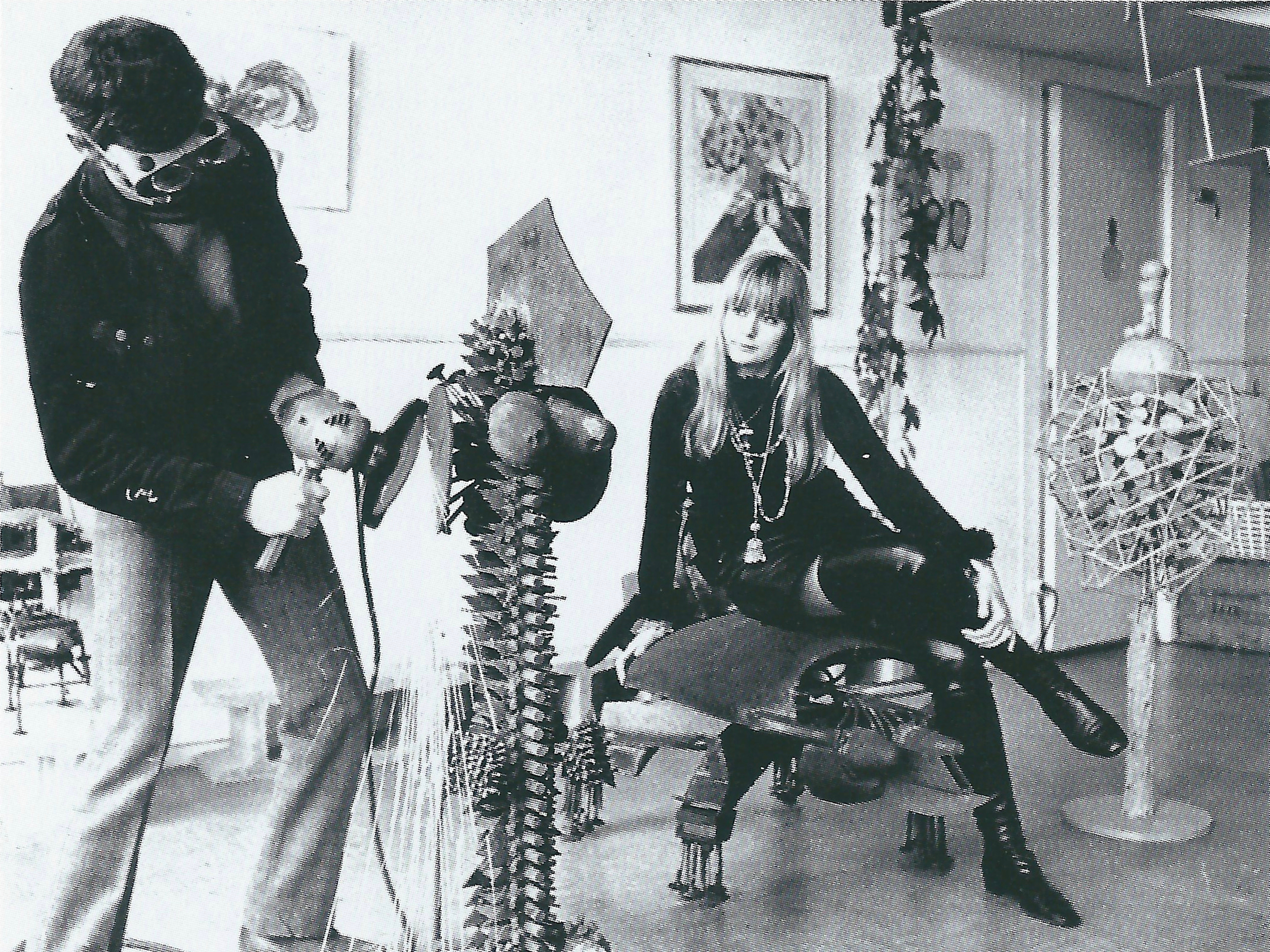 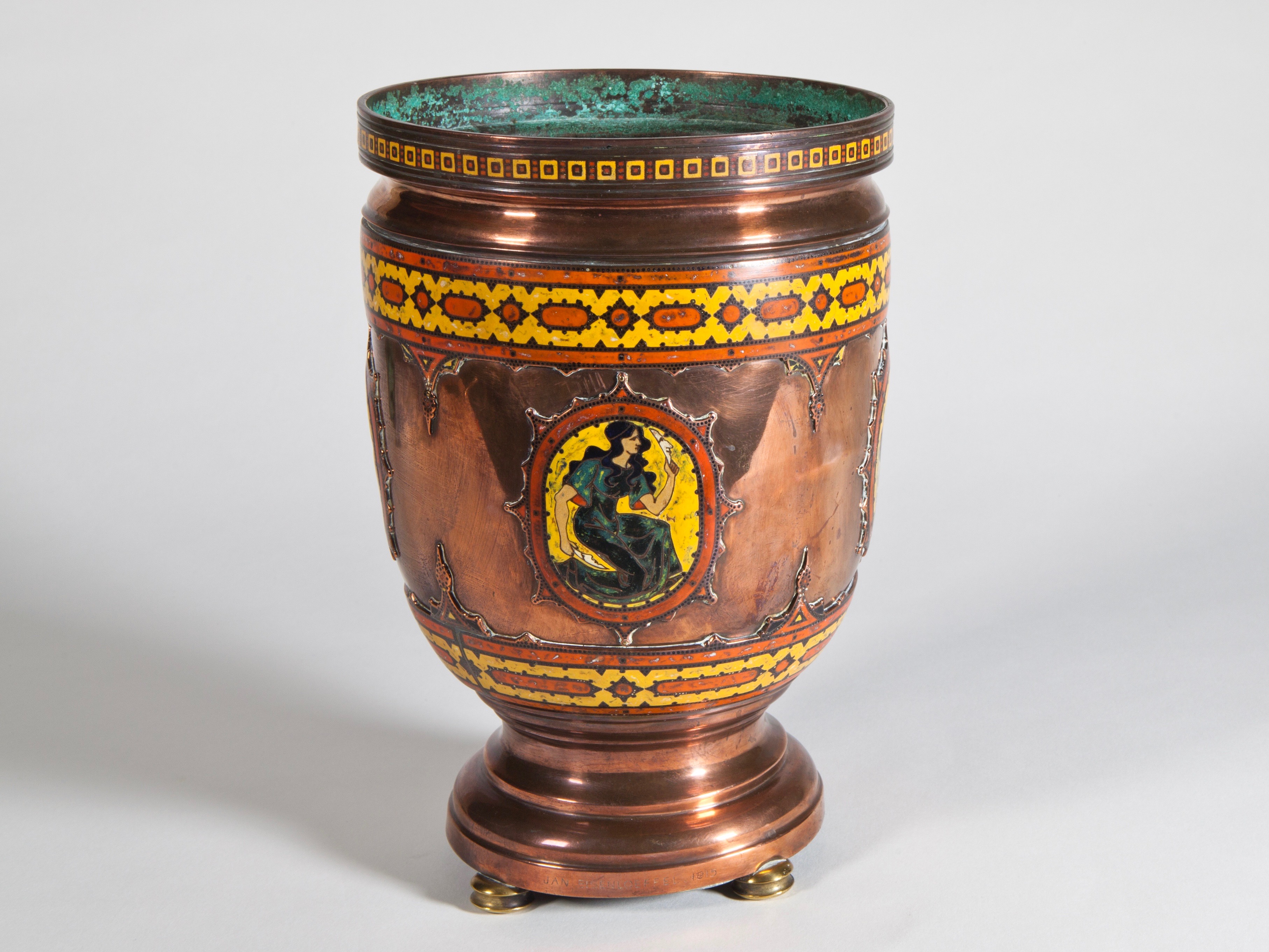 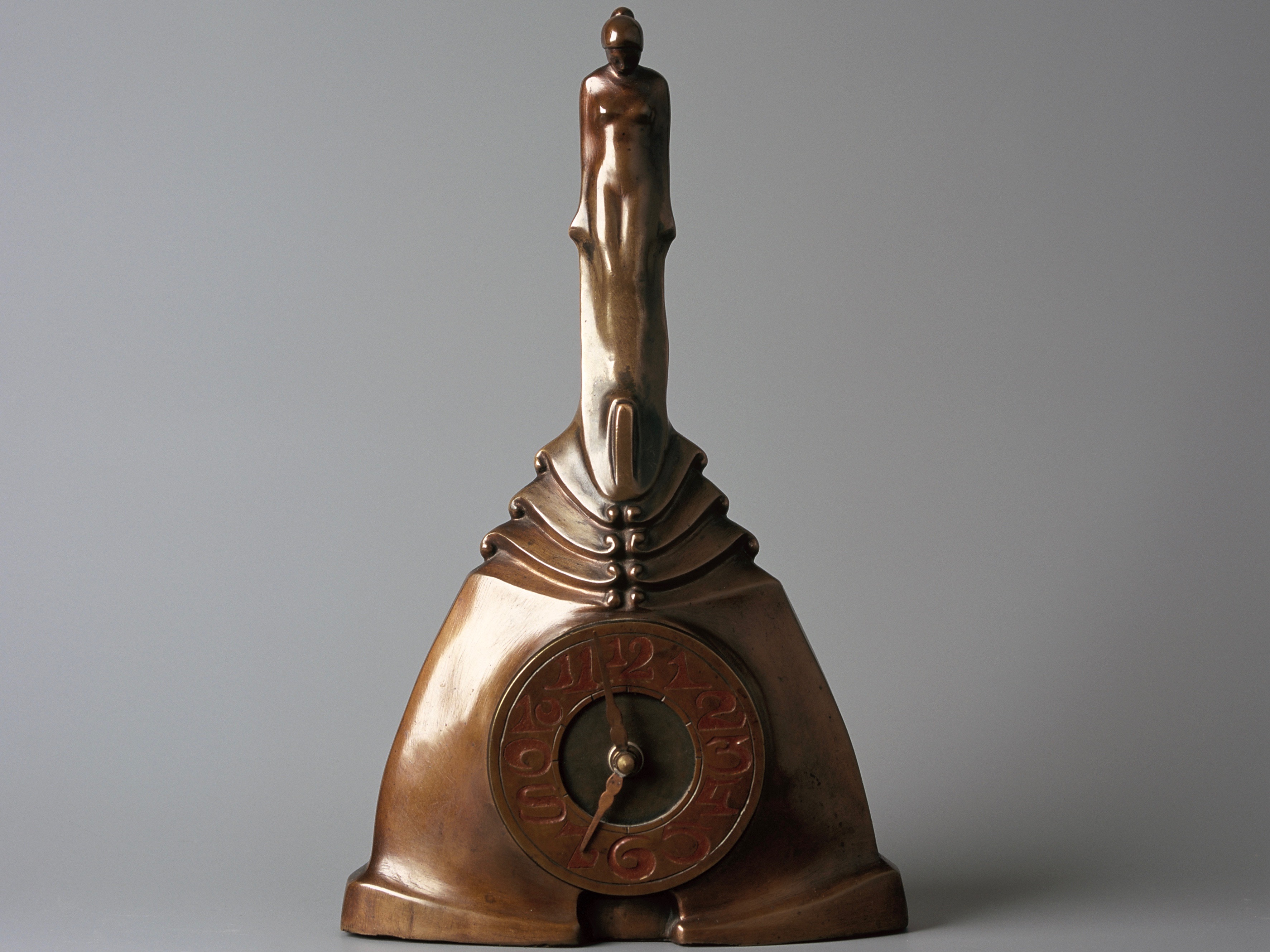