Vos was a son of the Groningen carpenter Andreas Jacobus Vos and of Alida Heidelberg. He was educated at Academie Minerva with Johan Peddemors and continued his studies at the Académie des Beaux-Arts in Brussels with Victor Rousseau (1911-1912).[2][3] In the following years he lived and worked in Paris, Cologne and London and settled in the Netherlands again in 1916. He then lived alternately in Haarlem, The Hague and Amsterdam and from 1944 permanently in Haarlem.[4] Vos made, among other things, female and child figures, masks and animal portraits. In 1924-1925 he designed figurines of a lute player and three dancers for the German porcelain manufacturer Hutschenreuther, with the dancer Gertrud Leistikow as a model. Vos made a lot of building sculpture, facade statues and reliefs for Gerrit Jan Rutgers, Willem Kromhout and other architects. An example of this is the series of ten facade images, 'citizens of the world', and other facade elements that he made in 1929 for the extension of the American Hotel. world citizens In 1930 Vos, Frits van Hall, Johan Polet, Adrianus Remiëns, Jan Trapman and Marinus Vreugde made gable stones to embellish railway viaducts for a ring railway in Amsterdam. Partly due to the crisis, the ring railway was not built. The facing bricks were stored and were placed on Nieuwe Hoogstraat in 1983.[5] In 1931 Vos was one of the nine sculptors, alongside Trapman, Vreugde and Willem IJzerdraat, among others, who were commissioned by the municipality of Amsterd. 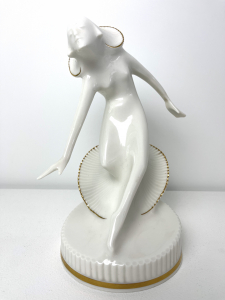