The Moorcroft pottery was founded in 1897 as a studio within a larger ceramics company: James Macintyre & Co. In 1913, William Moorcroft resigned from the company of Macintyre and started his own factory at Sandbach Road. When William Moorcroft died in 1945, his son Walter took over the management and design. Since 1993 the Edwards family has owned the factory, with Rachel Bishop as head designer. Moorcroft pottery is characteristic for its hand drawn decorations influenced by Art Nouveau, often in combination with the technique of tubelining. 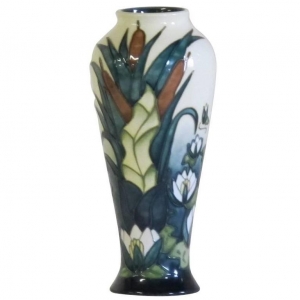