Marja Hooft (1946) is a Dutch ceramist. She attended the department of ceramics at the Gerrit Rietveld Academie in Amsterdam. Subsequent she attended the Rijksacademie voor Beeldende Kunsten, also in Amsterdam. After that, she worked on the Experimental Department of the Porceleyne Fles in Delft. Hooft is one of the founders of the group Cheops. This group wanted, in Hooft's own words, to create some 'breathing room' in the 'cramped world' of Dutch ceramics. From the years 1973 until 1982 her work was strongly inspired by her hometown Heusden, with its small houses, trees, furrows and birds. The colorscheme of her work consisted of white, gret and blue until 1982. Afterwards, colour and decoration began to play a more important part and her works became more abstract. Nowadays, Marja Hooft focuses on tranquility and attention for the characteristics of the material she uses. 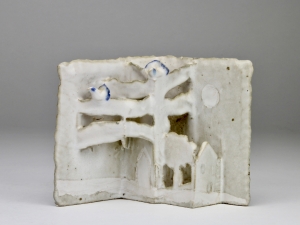