Laurens (Louis) Albertus Bogtman (1900-1969) worked from 1915 in the glass studio of his uncle Willem Bogtman in Haarlem. After this he went to work in the workshop in Hilversum that was founded in 1917 by his father, Cornelis Bogtman. In the 1920s Louis Bogtman designed all kinds of arts and crafts and experimented with batik - originally a decorative technique for textile - on various materials such as glass, eternite, metal, earthenware, wood and celluloid. The family workshop became especially known for the batik decoration on wooden furniture and other utensils such as bookends, clocks and bowls in the Amsterdam School style. The studio closed around 1935. Louis Bogtman performed internationally from 1932 as a baritone singer. He also made ceramics in Denmark and died in Copenhagen in 1969. 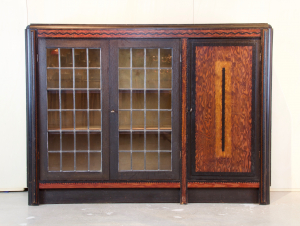