Kees van Renssen (1941) is a Dutch sculptor and ceramist. He studied at the Instituut voor Kunstonderwijs in Amsterdam, where he was the only student at that time. He also worked for the Porceleyne Fles in Delft on the Experimental Department. Van Renssen developed a scratch technique in the engobe-layer, which would later be used by other artists too. He is acknowledged as one of the most important ceramists between 1960 and 1980. Since 1999 Kees van Renssen lives in France where he opened a ceramic gallery. 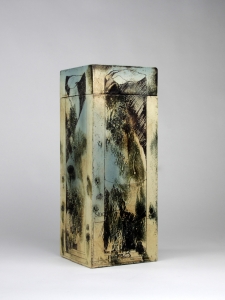