Harriet de Maar-Sielcken (1929 – 2015) was a Dutch ceramist, born in the former Dutch East Indies. She studied at the Instituut voor Kunstnijverheidsonderwijs, where she was educated by Willem de Vries en Theo Dobbelmann. Afterwards she worked at the Experimental Department of the Porceleyne Fles in Delft, where she experimented with engobe-decoration techniques. She also worked with Lies Cosijn, who decorated some of De Maar-Sielcken's works. Her works are characterised by special and fine form of colour patches. Harriet de Maar-Sielcken later moved to France, and in 2008 relocated to Texas in the United States where she passed away in 2015. 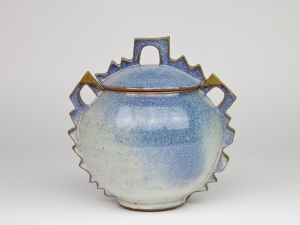