German expressionist sculptor Emy Roeder (1890-1971) was educated in her birthplace Wurzberg and was also a pupil of sculptor Bernhard Hoetger in Darmstadt. In the 1920s she settled in Berlin as an independent artist, where she became friends with several other expressionist artists such as Rudolf Belling, Kathe Kollwitz and Karl Schmidt-Rottluff. When Germany came under National Socialism, her art was considered ‘Entartete Kunst’. She moved with her husband Herbert Gabe to Rome in 1933. The following years Roeder stayed on her own in Rome, Paris, Bavaria and Florence. It was not until 1949 that Roede returned from Rome to Germany where she settled in Mainz. 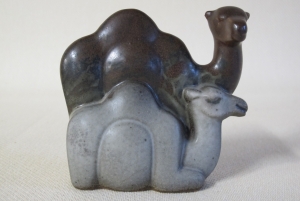