Bram Roth, (Abraham Cornelis) was born on September 7, 1916 and died on October 21, 1995 in The Hague. He was educated at the Royal Academy of Art in The Hague. Was a student of BMA Ingen Housz, Marino Marini and Albert Termote. Member of the New Images League, Pulchri Studio, Verve and the South Holland Cultural Council. About 450 statues are displayed in The Hague. The Hague sculptor Bram Roth played a large part in this and left many traces in The Hague. A striking rider on horseback, for example, at the Houtrust Bridge and a woman lying along the water at the flower garden of the Zuiderpark. In the Westbroekpark he is the only artist who is represented there with two statues, one in stone and one in bronze. Roth is an artist who does not make it difficult for the viewer. If he has a message to tell at all, it is on the surface. Roth himself said that his work, in which women and horses are the main themes, is naturalistic, but not an imitation of nature. He was concerned with spaciousness, volume, tension and expression of the skin. Work by Bram Roth is also present in the Gemeentemuseum in The Hague, the art collections of KPN and TPG Post and the National Collection. Mentioned in the Scheen 1969-1970. Worked, among other things, as a teacher at the Rotterdam Academy of Visual Arts and as an independent sculptor and painter. Designs the Maecenaspenning in 1955 for Pulchri Studio. 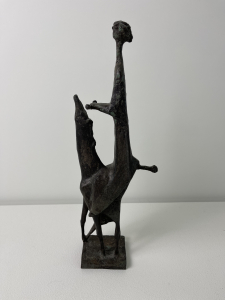