Pier Giacomo Castiglioni (1913-1968) and his brother Achille Castiglioni (1918) studied at the Politecnico di Milano. Achille went to work at the design agency of his oldest brother Livio Castigilioni (1911-1979). The brothers were incredibly productive and did not only design many lamps, but also radios and furniture and they even took on urban design and architectural assignments. The Castiglioni brothers had a big influence on Italian design. They were co-founders of the Triennial exhibitions in Milan and the Compasso d'Oro prizes. In addition, they influenced the next generation of Italian designers through their teaching at several Italian academies. 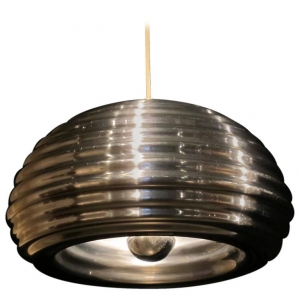