Theodoor van Hoytema (1863-1917) was an illustrator, painter and draughtsman. He attended an evening course at the Academy of Fine Arts in The Hague, after which he worked as a draftsman for the Zoological Museum in Leiden. In 1892 he joined the Haagsche Kunstkring. His decorative illustrations from this period show motifs of flora and fauna. Under the influence of the French Art Nouveau his later style became more playful. He became well known for his children's picture books influenced by the Arts and Crafts movement from England. Hoytema also made designs for interiors, vases and tiles executed by the Porceleyne Fles and furniture designs for Wijngaarden & Co. Architect Everwijn Verschuyl designed the furniture itself, Hoytema the decorations for the panels and edges. 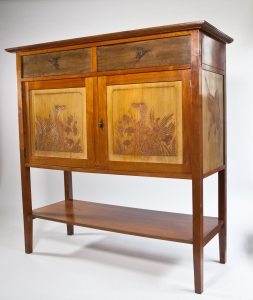 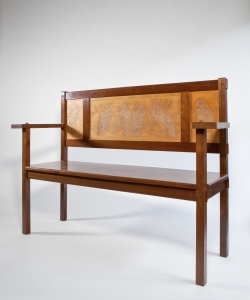