Theo Molkenboer (1871 – 1920) grew up in a family of artists and wanted to become a versatile artist himself. He painted, drew, engraved and made lithographs. Besides that, he was an architect, sculptor and writer. From 1889 until 1891 Molkenboer attended the Rijksnormaalschool voor Tekenonderwijzers, which was established by his father Willem Molkenboer. Subsequently he followed courses at the Rijksacademie in Amsterdam. From 1901 until 1904 he was artistic leader at the Faience- en Tegelfabriek Holland in Utrecht. He also worked in Haarlem and the United States, where he painted the portrait of the former president William Howard Taft. 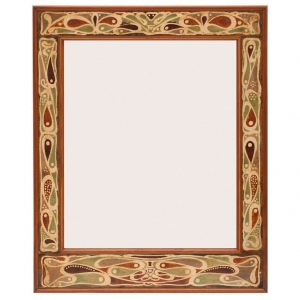