Ru de Boer (1920 – 2010) was a Dutch ceramist. In 1946 he started working at pottery Zaalberg in Leiderdorp. He was inspired by the work of Pieter Groeneveldt. In 1957 he began working for the earthenware factory RAM in Arnhem. Here he created modern works in chamotte clay with a robust look. De Boer worked for RAM until its definitive closure in 1969. Afterwards he started teaching until he retired in 1985. This gave him the time to work as an independent ceramist. He then created mainly free work and thematical series. 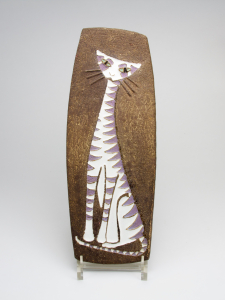