Pauline Wiertz (1955) is a Dutch ceramist. In 1972 she enrolls at the Gerrit Rietveld Academie in Amsterdam. Until her graduation she produces traditional vases, and in 1977 she opens her own gallery. In her early years Wiertz mainly creates jars and vases. Later she produces objects with angular forms that consist of different slices of clay and oblique walls. In the walls and the upper edges small patterns are carved with a knife. These patterns sometimes come back in color on the glazing. Many of these forms flow over the edges. Later in her career she also produces free forms like gates, that show a relationship between the interior and exterior. In 1990 she visits Japan, where she is inspired to create assemblies of food products. Since 2000 Pauline Wiertz designs jewelry and in 2010 she starts producing porcelain bags. 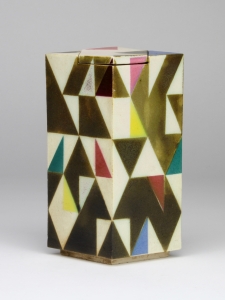