Lino Tagliapietra (1934) was born in Murano, a centuries-old center of Venetian glass blowing. Already at the age of 11 he was apprentice of master glassblower Archimede Seguso and at the age of twenty-one he was named 'Maestro', a title given to only the best glassblowers. Tagliapietra then worked at various glass factories in Murano, including Effetre International, where he was artistic and technical director. He also started to work together with international glass artists. His collaboration with the Dutch glass designer A.D. Copier had a major influence on his work. Copier changed Tagliapietra's view of glass as a medium for art. Tagliapietra has also had a major influence on American glass art. In 1979 Tagliapietra taught Venetian glass blowing at the Pilchuck Glass School in Seattle, where he eventually founded a glass studio. 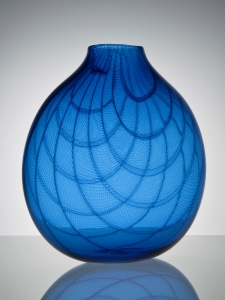