Karel Petrus Cornelis de Bazel (1869-1923) is best-known as a Dutch architect, but he also designed interior art, such as furniture, utensils and glassware for Glass Factory Leerdam. De Bazel started his career as a carpenter’s apprentice. In the evenings he followed architecture at the Royal Academy of Art in The Hague. In 1889 he was appointed as an architectural draftsman at the workshop of Pierre Cuypers, designer of the Rijksmuseum and Central Station in Amsterdam. Around 1900 he started his own architectural firm in Bussum and in 1904 he founded together with Kees Oosschot and Klaas van Leeuwen the furniture workshop ‘De Ploeg’. His early designs are characterized by clear and simple forms. Later, Eastern influences played an important role. De Bazel preferred to deliver ‘total concepts’ in which the exterior and interior were seen as a whole. 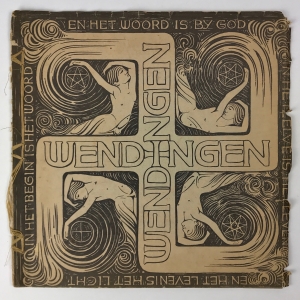