Danish painter, graphic designer and designer Johan Rohde (1856-1935) studied at the academy in 1882. He was, however, very critical of the conservative attitude towards the new art styles and left the academy the following year for the newly established Kunstnernes Studieskole. In 1891 he would again oppose the established art world as founder of Den Frie Udstilling; an exhibition that exhibited work that would normally not be accepted by the academy. Rohde was influenced in his work by artists such as Van Gogh, Cezanne, Gauguin and Toulouse-Lautre. In  his object he clearly shows his own style and artist's vision. Rohde worked a lot with silversmith Georg Jensen, for whom he designed objects that Jensen would execute. 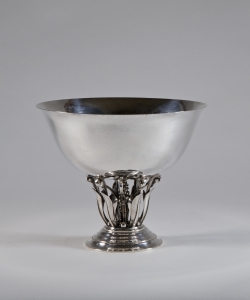