Jan Eisenloeffel (1876-1957) was a goldsmith and designer. He followed a course at the Rijksnormaalschool voor Teekenonderwijzers from 1892 to 1896. In 1996 he stayed briefly in Russia, where he learned to enamel and work with niello. He became head of the metal workshop of Amstelhoek from 1899 to 1902. For a short period, he collaborated with J.C. Stoffels. After this collaboration he worked for different employers. In 1914 he moved to Amsterdam where he founded Jan Eisenloeffel's Kunstnijverheid. Eisenloeffel wanted to make his objects available to a wide audience and therefore he used affordable materials that could be produced cheaply in series, such as copper, brass and alpaca. He designed numerous utility objects, including dinnerware, lamps, clocks and candlesticks. His later work shows influences from Eastern cultures, in line with the international Art Deco style. 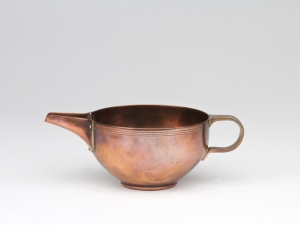