Iet Cool-Schoorl (1931) was born in the Netherlands, and has lived in Australia. Upon her return to the Netherlands in 1966, she started making ceramics. Her early works are signed with a monogram from the letter I-E-T. Later she signs with IET. Her work is mainly inspired by nature. Iet Cool-Schoorl has made a lot of animal- and human figures, but also vases and bowls. 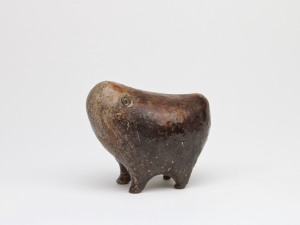