The German artist Hannah Höch (1889-1978) is especially known for her work from the Dada period, in which she worked predominantly with the photomontage technique. Höch followed her education at the Städtische Kunstgewerbe- und Handwerksschule Charlottenburg in Berlin. After the end of the First World War she studied graphic design as an apprentice of Emil Orlik. In these years she met Dadaists Raoul Hausmann and Kurt Schwitters. Her work in her Dada period was anti-art and often expressed a political message. In addition, Höch addressed in her work the position of women in society which she aspired to change. 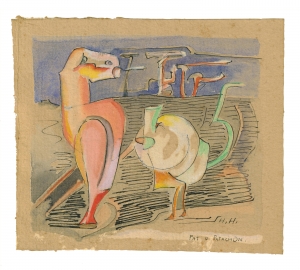