Han Boerrigter (1935) was born in The Netherlands. He has also lived and worked for several years in Canada. Boerrigter developed an interest in ceramics when he was asked to build a turntable for a group of ceramists. Since 1963 Boerrigter has been producing his own works. Only after one year, he already won his first price in Vancouver. Later he decided to move to California in the United States. In 1973 he finally returned to The Netherlands where he opened a ceramics studio. Boerrigter is interested in the glazings, forms and decorations of China, Korea and Japan. He tries to recreate the glazings with his own twist. The techniques he developed this way give his work an unprecedented craquelure due to its extraordinary bright colours. His works are inspired by tea ceramics from Asia, but have lost their function: they have become works of art. 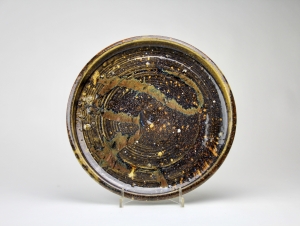