The Danish Georg Jensen (1866-1935) worked at the local knife factory at the age of 13, following in his father’s footsteps. Later he became an apprentice at the goldsmith firm A. Andersen, and in 1887 he was accepted at the art academy. After graduating, he worked at the silver workshop of Mogens Ballin during the day, and in his ceramic workshop at home in the evening. In 1904, Jensen opened a small workshop where he worked together with one silversmith, Otto Strange Friis, and two apprentices, Henry Pilstrup and Georg Nilsson. Here he produced jewellery in the Danish Art Nouveau style, the skønvirke style. He worked in silver, rather than gold, because this was affordable for a larger public, and often added coloured stones such as amber, coral and moonstone. The by nature inspired designs fitted the fashion of the time, and the workshop and its collection were soon able to expand. Thanks to fruitful collaborations with talented designers, such as Johan Rohde and Harald Nielsen, the firm gained international success. 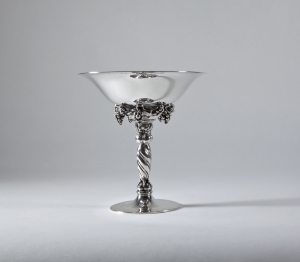 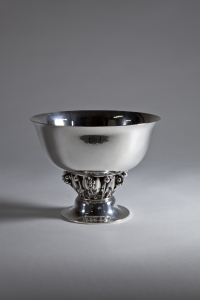