Geoffrey David Harcourt (1935) was a designer for the Dutch furniture manufacturer Artifort. Harcourt studied at the Royal College of Art in London, where he graduated in 1960. For two years he worked as an industrial designer in the United States, after which he returned to Europe and worked with Jacob Jensen in Copenhagen. His first design for Artifort in 1962 was a series of small desk chairs. The following year his second series, series 042, was a great international success. Harcourt's design philosophy is 'first the person, then the chair', whereby he strives for a design with a perfect balance of comfort and beauty. 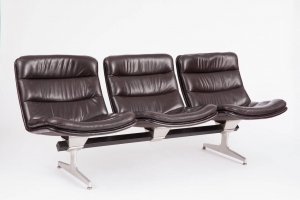