Dutch glass artist Bert Frijns (1953, Worms) studied at the Gerrit Rietveld Academy in Amsterdam, both in the glass and the sculpture department from 1973 to 1980. After his graduation he started his own studio in Landsmeer. From 1989 to 1991 he worked in Aulnay de Saintogne, France. After this he returned to the Netherlands, where he set up his studio in Zeeland. In his glass art Frijns is looking for a fundamental form, color and technique, which results in minimalistic and poetic works. 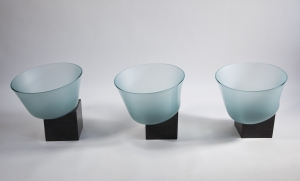