Anton Fortuin (Amsterdam 1880 – Utrecht, 1967) was a sculptor, ceramist and interior designer. He studied at the Academy for Visual Arts in Ghent. He worked in Amsterdam in his own studio and in 1930 he moved to Laren. During his time in Amsterdam, he worked in commission for Lion Cachet and W. Penaat on designs for the interiors of ships that sailed to the East. Fortuin is particularly known for his reliefs and small ceramic sculptures. He was interested in depicting animals in the Art Deco style. In the 1920s there was a revived interest among artists in the animal world. This was partly because around this time the first zoos opened, where artists could study the animals up close. 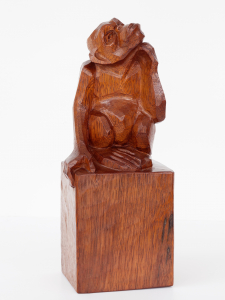