The earthenware factory De Porceleyne Fles was established by David Anthonisz van der Pieth in 1653. The factory focused on producing Delftware. During this period there was a high demand for pottery. However, during the 19th century De Porceleyne Fles was forced to mass produce cheap pottery because of foreign competition. Eventually the factory was bought by Joost Thooft in 1876, who wanted to start producing Delfts Blauw again. He received help of Adolf Le Comte, Leon Senf and his business partner Abel Labouchere. De Porceleyne Fles started to experiment with form, colour and glazing. This way they developed new sorts of ceramics, for example Berbas and Reflet métallique. In 1919 the factory was honoured with the title ‘Royal’. Nowadays the factory is also called Royal Delft and still active. Due to its high-quality Delftware it has obtained international standing. 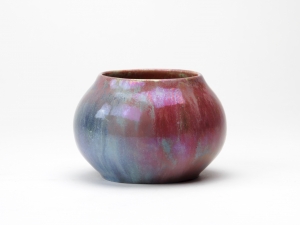